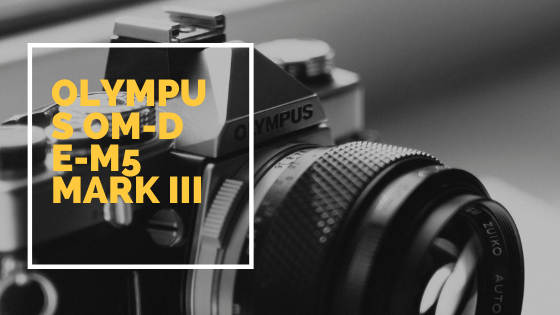 The Olympus E-M5 Mark III is Olympus’s most accessible amateur camera. We have been shooting with the new Olympus OM-D E-M5 Mark III, got excellent results. you might choose this camera to improve your photography.

What is the Olympus E-M5 Mark III?

The Olympus OMD EM5 Mark III is a mid-range mirrorless camera aimed at photo and video shooters who value portability and handheld use without compromising features and quality. Announced in October 2019, it’s the long-awaited successor to the EM5 Mark II launched four and a half years previously.

It inherits the 20 Megapixel Four-Thirds sensor from the EM1 II which finally brings confident phase-detect autofocus and 4k video to the EM5 series, while also boasting improved built-in stabilization in a slightly lighter but still weather-sealed body.

It’s hard to argue with the E-M5 Mark III combination of features and portability – no other camera of this size offers the same mix of in-body image stabilization, an articulating screen, and weather-sealing.

Olympus has also upgraded everything this camera needed to keep it relevant in the smartphone age, including a new EVF, AF system, sensor, and versatile software features. More advanced photographers might balk at its Four Thirds sensor and price tag, but the E-M5 Mark III looks a very strong contender for smartphone upgraders, travel photographers, and, in particular, vloggers. Look out for our full verdict on how it compares to the likes of the Fujifilm X-T30 and Sony A6400 soon.

Picking up the camera, my first thought was how light the body was. That’s due partially to its use of lighter body materials and though it’d not be clad in a very metal shell, it’s still weather-sealed (though I didn’t place that feature to the test on my shoot).

More weight is saved by employing a smaller battery — identical one found within the E-M10 Mark II. Now whereas this camera upgrade doesn’t use your existing batteries, I have to give credit to Olympus. The E-M5 Mark III is charged via USB, thus throughout a prospect, I flat-topped up the battery via a USB power bank.

The E-M5 Mark III physical design isn’t a radical reinvention of the series, but there are a few improvements. It’s lighter than its predecessor, which wasn’t exactly chunky, thanks to a smaller in-built image stabilization system and battery. The E-M5 Mark III is similar in size and weight to a Fujifilm X-T30, but unlike that camera manages to pack in IBIS and weather-sealing.

Another much-needed improvement is a refreshed viewfinder – the E-M5 Mark III’s EVF has the same 2.36-million resolution as before (which is standard for this size and price) but is now OLED. That helps image previews pop a bit more, which is useful considering the relatively small 0.69x magnification.

What about handling and controls? The E-M5 Mark III has a slight edge over its predecessor here too. The grip and thumb rest is a bit bigger, which makes it feel a bit more comfortable in the hand, but if you want DSLR-like handling in a small body then the new Nikon Z50 is a better bet.

One benefit cameras like this have over smartphones is their manual controls, and Olympus has doubled down here by adding extra buttons to the top plate. There’s still a mode dial plus two control dials for changing your aperture or shutter speeds, but it now also has a dedicated ISO button plus a new control on the left for changing drive mode and AF settings.

The real trump card for vloggers and videographers, though, is the fully articulating screen, which is another feature that’s rare on a camera of this size. This is something you can only really find on larger bodies like the Panasonic G95 and Canon 250D. The E-M5 Mark III has a new mic input too, making it a real rival to the Panasonic G95 in the vlogging stakes.

Overall, the E-M5 Mark III is a really fun camera to use with a huge range of lenses to choose from. It’s also boosted its feature set too.

One of the traditional downsides of Micro Four Thirds cameras is that they don’t perform quite as well as APS-C and full-frame models when shooting at high ISOs.

That’s something I didn’t have time to test conclusively on the E-M5 Mark III, but Olympus says the new image sensor and processor have both improved noise performance in low light. In fact, the ISO Auto upper limit is now ISO 6400 (two stops higher than before), which shows Olympus’ confidence in the E-M5 Mark III performance in gloomier conditions.

One thing that was clear from my early JPEG shooting, though, is that the E-M5 Mark III retains the series’ traditional strength of producing great out-of-camera photos. The OIS helps with handheld shooting and the ‘natural’ color profile (which I used the most) produces punchy colors that don’t go too far into over-saturation. There are plenty of other photo modes to play with too, including black-and-white options.

While I didn’t have much time to test its video powers, these have certainly been boosted on paper – you now get 4K shooting at 30fps, plus new 120fps slo-mo shooting in Full HD. With IBIS and an articulating screen, plus a new autofocus system and mic jack, Olympus has built a very strong case for the E-M5 Mark III becoming the vlogging camera of choice for YouTubers.

Olympus has really filled the E-M5 Mark III with features, far more than I could test in a single shoot. For example, if you shoot fast-moving subjects, then you’ll love professional capture, that records pictures before and once you press the shutter.

We’ll give you our definitive verdict on this vlogging performance, and the rest of its features and stills capabilities, in our full review. The earlier EM5 Mark II was one of my favorite all-around cameras: stylish with excellent controls, compact but comfortable, sporting a useful side-hinged screen, good viewfinder, some innovative modes, and amazing stabilization. The only real downside was its continuous autofocus which fell behind rivals adopting more confident phase-detect systems.

When the EM1 Mark II finally brought phase-detect autofocus to Micro Four Thirds three years ago, I immediately thought about how it could transform the EM5 series, but due to a variety of circumstances, it’s taken until 2019 for it to happen. I feared the update the EM5 would now be too late, but thanks to strange limitations and decisions made by its rivals, it actually becomes one of the most compelling cameras in its category.

Yes, the sensor is smaller than APSC and the price higher than many mid-rangers, but the combination of features complemented by excellent stabilization remains unique and very tempting. Some cameras come close, but don’t quite deliver the whole package: Canon’s EOS M50 has the mic input, side-hinged screen, and great autofocus for 1080p, but its 4k is compromised and there’s no built-in stabilization.

Meanwhile, Panasonic’s G95 has the mic input, side-hinged screen, and built-in stabilization, but again the 4k is cropped and the movie autofocus not as confident.

I’ve started testing a final production model and ahead of my final review have added a selection of sample images and movies for you.